PASS Summit is back for 2017, and so is Speaker Idol

I’m pleased to announce that PASS has made the mistake of letting me run the Speaker Idol at the PASS Summit for another year.  If you 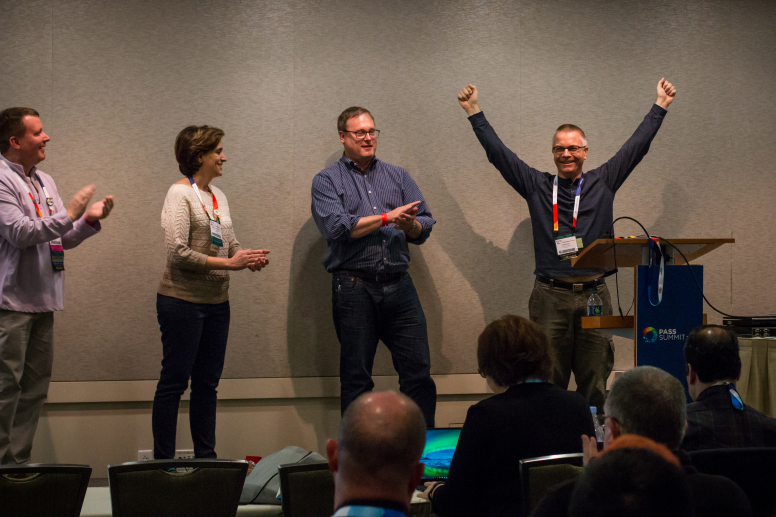 haven’t seen the speaker idol before it’s kind of like the TV show of the similar name. But instead of winning a contract that’ll never be fulfilled by some recording company, you win a speaking spot at the next PASS Summit.  One of the parts I love about Speaker Idol is that by the end of the PASS Summit we know who are first speaker is for the next year.  It also gives 12  speakers the chance to speak at the PASS Summit lightning talk style with immediate feedback from our panel of judges, who are all top PASS Summit speakers.

If you’ve always wanted to speak at the PASS Summit but haven’t been selected, this is your chance to get in front of the community and make yourself known. Several past contestants of Speaker Idol have gone on to speak at that PASS Summit even without winning the competition.  One of the benefits of competing in the Speaker Idol competition is that it gives you visibility to the program committee, the judges and the community at large so that more people are aware of you and your speaking style.  This alone will increase your odds of being selected to speak at the PASS Summit in the future (if you don’t win the competition).

It you competed in a prior speaker idol (and you didn’t win a speaking slot at the PASS Summit) you’re welcome (and encouraged) to submit again.

Here’s a few blog posts that some of our prior contestants have posted about the experience.

Now for the rules (or you can just sign up here):

You must have spoken at one of the following events (in a format other than a lighting talk, where your session had at least 30 minutes of content delivered by you):

You have not spoken at the PASS Summit of PASS Business Conference for a breakout, spotlight or pre-con session. (If you gave a lightning talk and no other session you are eligible.)

You are not scheduled to speak at the 2017 PASS Summit.

You will be in Seattle during the PASS Summit (attending PASS isn’t needed, and if you aren’t attending PASS we will get you to the session room for Speaker Idol).

You are available to attend which ever speaker idol session(s) you are assigned to (including the final session on Friday afternoon).

You have a 5 minute technical presentation which you can give. (Time management is your responsibility.)

You sign up on the registration form before September 8th, 2017 at 11:59:59pm (23:59:59) according to Google’s time function in their spreadsheet application.  Because of the tight schedule between this announcement and PASS late applications can’t be considered.

You are not a member of the PASS Board of Directors or an employee of PASS.

You are not employed by a sponsor of Speaker Idol

If a contestant drops out of the contest before the PASS Summit starts the organizer (Denny Cherry) will reach out to the next person on his list that wasn’t accepted and offer them an position in the contest.  People will be offered spots in the competition until someone accepts.  The organizer will NOT announce how many people if any turned down a spot in the competition.

If a contestant drops out of the contest during the PASS Summit (for purposes of this clause “during the PASS Summit” is defined as from the time that Denny gets to Seattle, which will probably be Saturday or Sunday before the conference, until Friday afternoon) no changes to the lineup will be made.

If a judge is not able to complete the competition they will not be replaced.

The wild card winner will be selected by the judges at the end of the Friday morning round from the runners up from each round.  If a winner is not able to compete in the finals, and the runner up is already speaking in the finals, the judges may consider all contestants from that round as eligible for the wildcard slot.

Judges do not have to recuse themselves because a friend is in the competition.  Judges are expected to be fair.

You are responsible for your own travel to the PASS Summit to compete in this competition.

You may present your session in any format that you’d like.  You can view the recordings from 2015 (the 2016 recordings current require that you purchased the recordings, I’m working on fixing that) via PASS TV.

Contestants are allowed to watch the other sessions during speaker idol and make changes to their presentation as they see fit.

In case you missed it above, the Sign Up Form is <- there.

Stay tuned for announcements on the judges and the contestants.  (Judges won’t be announced until after the PASS schedule is finalized as I need to see who’s available to be a judge.)

After you sign up, shortly after the sign up period closes, the applicants will be sifted through and the 12 contestants will be selected and emailed.  They’ll have a short period of a couple of days to accept the invitation to compete.  Once we have 12 “yeses” we’ll all get on the phone to talk though what you should expect, talk about what kinds of sessions you want to give, and get any questions answered from this years 12.

That’ll give a few weeks for the 12 contestants to put together their slides for the speaker idol and prepare to give the best 5 minute sessions that they can.

The post PASS Summit is back for 2017, and so is Speaker Idol appeared first on SQL Server with Mr. Denny.

This site uses Akismet to reduce spam. Learn how your comment data is processed.

Trust DCAC with your data

Your data systems may be treading water today, but are they prepared for the next phase of your business growth?

You can find out more about which cookies we are using or switch them off in settings.

This website uses cookies so that we can provide you with the best user experience possible. Cookie information is stored in your browser and performs functions such as recognising you when you return to our website and helping our team to understand which sections of the website you find most interesting and useful.

Strictly Necessary Cookie should be enabled at all times so that we can save your preferences for cookie settings.

If you disable this cookie, we will not be able to save your preferences. This means that every time you visit this website you will need to enable or disable cookies again.